“Share your knowledge. It is a way to achieve immortality.” (The Dalai Lama) 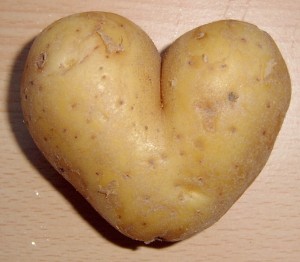 My talent as a cook is about equal to my interest in cooking—random and fleeting, sporadic at best. Fortunately for me and our friends, my husband is a good cook, and a venturesome one. He does the lion’s share of the meal prep in our household.

Many years ago, he decided he wanted to master potato salad. He tried several recipes, but never found one that excited him. His stepmother made an exceptionally good potato salad and that’s what he was aiming for. So he asked step-mom for her recipe. She refused.

For whatever reason, she didn’t want anyone else to have her recipe. I wish I could say I was surprised, but she was one of those people who held tightly to everything she had. She had neither open hands nor an open heart. A few years later she died, taking with her the secret to her great potato salad. Sadly, the loss of the salad was probably mourned more than the loss of the woman.

Bill did finally find a great potato salad recipe, shared by TV personality Joan Lunden. We appreciate her generosity every time we enjoy the salad and make it for friends.

As previously noted, my own cooking is generally mediocre and uninspired, but on those rare occasions when someone asks for one of my recipes, I am elated and eager to comply. I have even been known to inflict unrequested recipes on my dinner victims guests. And, fortunately, my friends—who are all fabulous cooks—are always generous in sharing their recipes.

I’ve never understood people who are unwilling to share their recipes. What is it they’re holding on to? Does it give them a sense of superiority to know that no one else will ever be able to replicate their Chicken Marsala or Cherry Chocolate Walnut Cream-Cheese Pie? How much better it would be to know there are people preparing our recipes and thinking of us fondly as they do.

Refusing to share a recipe is just one example of how we sometimes senselessly withhold things in our lives—from recipes, to compliments, to knowledge, to assistance.

In my professional life, I occasionally saw this behavior exhibited by colleagues who somehow felt that holding information close to their vest gave them an advantage. I would see them strategically spring their information in a board or committee meeting, often blindsiding other colleagues who would have welcomed the knowledge earlier. Sometimes this resulted in needless scrambling to adapt to new information that should have been provided sooner. While the individual who withheld the information may have been perceived as smart or powerful, they were acting in their own interest rather than the group’s or organization’s.

Writer Annie Dillard has addressed this more eloquently than anyone I know:

“The impulse to save something good for a better place later is the signal to spend it now. Something more will arise for later, something better. These things fill from behind, from beneath, like well water. Similarly, the impulse to keep to yourself what you have learned is not only shameful, it is destructive. Anything you do not give freely and abundantly becomes lost to you. You open your safe and find ashes.”

How many of us are guilty of saving things for special occasions, realizing only much later that we never actually enjoyed having them. Maybe it’s a piece of clothing, or a delicate china tea-cup, or a journal so beautiful we hesitate to write in it. Often those special occasions never come, and we die with our treasures neatly tucked away, wrapped in tissue paper.

A story to illustrate this made the rounds of cyberspace many years ago. The author writes about how she and her brother-in-law found an exquisite and expensive silk and lace slip among her sister’s things after she died. It had never been worn—she had been saving it for years for just the right “special occasion.” They had her buried in it.

As writers, we are sometimes guilty of holding onto our ideas, saving them for just the right time, waiting for the ideal place to share them, or the perfect time to tell our story. We delay so long that sometime those stories never get told—and we were the only one who could have told it in just that way. What were we waiting for?

What we love and treasure is not meant to be hoarded or held back, but to be used, shared, enjoyed, and savored. More will come, it always does. Likewise, what we have or know and can give to others is meant to be offered.

Is there anything in your life that you’re holding back—either not sharing with others or not allowing yourself to enjoy? What are you waiting for?

27 thoughts on “What Are You Holding Back?”