“I cannot live without books.” (Thomas Jefferson to John Adams) 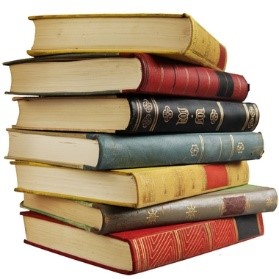 Many years ago, a friend gave me a paperweight with that Jefferson quote inscribed on it. It has sat on my desk for more than two decades. I suppose it is a bit of exaggeration to say one cannot live without books. Maslow’s hierarchy did not lump books with food, water, oxygen, or shelter. Had they been mentioned at all, books might have been relegated to the levels where belonging or self-actualization reside.

Less poetic, but perhaps more precise would be to say I cannot imagine a life without books.

Some of my earliest memories are of books. As a morning child in a family of night-owls, I remember reading in bed for two, three, even four hours before my parents got up on weekend mornings. The best Christmas gifts were always books, and the best activity for whiling away the hours on any holiday was to curl up with a book. I recall the excitement of receiving the periodic Scholastic Books catalog in school and running home to see how many my parents would allow me to order, then poring over the catalog with my pencil clutched tightly in my hand. The day the books arrived was as good as Christmas—maybe better—since it didn’t require getting dressed up or spending long hours with aunts, uncles, and cousins.

The list of things that concern me about our current President is encyclopedic, and high on that list is the fact the he doesn’t read—and that he seems proud of that fact. He doesn’t need to read other people’s words or think about what other people have experienced; he doesn’t need to understand history or ponder the thoughts of wise men and women from the past. He carries all the wisdom he will ever need in that cotton-candy brain, under that cotton-candy hair. He tells us confidently that he is a “stable genius.” It’s scary that he says it, scarier that he believes it. And scarier still that so many people are willing to blindly accept it because he says it’s true. I wonder whether these people are readers, and what they read, and why some never outgrow a juvenile infatuation with Ayn Rand.

I recently read a news story about five teenagers in Virginia who were arrested for defacing the Ashburn Colored School, a one-room, 19th century schoolhouse that had been used by black children during segregation. The teens were 16- and 17-years old; two were white and three were nonwhite. They spray-painted swastikas and the words “white power” and “black power” on the historic building.

Ordinarily, a conviction for such vandalism would probably have resulted in community service, and perhaps a fine, for the underage offenders. But Judge Avelina Jacob, at the suggestion of Deputy Commonwealth Attorney Alejandra Rueda, imposed a very different sentence: She made them read books. And after that, they were to submit written reports on what they read and what they learned.

Among the books they could choose from were Maya Angelou’s I Know Why the Caged Bird Sings; Elie Wiesel’s Night, Arthur Miller’s The Crucible; Khaled Hosseini’s The Kite Runner; Harper Lee’s To Kill a Mockingbird; T.C. Boyle’s The Tortilla Curtain; Solomon Northup’s 12 Years a Slave; and Chinua Achebe’s Things Fall Apart.

Because of the age of the offenders, their identities were protected, but the New York Times did—with permission—run anonymous excerpts of one young man’s court-ordered essay.

The teen acknowledged that he hadn’t understood what a swastika meant. Now, though, he recognized the swastika as a symbol of oppression and white power, of claims that the white race “is above all else, which is not the case.” He further wrote that “Everybody should be treated with equality, no matter the race, religion, sex, or orientation. I will do my best to see to it that I am never this ignorant again.”

Judging from that statement alone, I would say that lives were changed as a result of this unusual sentence. The reading penance has since been applied to at least one other Virginia case precipitated by teen bigotry.

Reactions to the punishments have been mixed. Marilyn Nelson, author of A Wreath for Emmett Till—a book of poetry about the young black man lynched in 1955 Mississippi—expressed concern. “I can’t say I’m pleased to know that my work is being inflicted as punishment. Will kids punished by being made to read poetry ever read poetry again?” Her concerns were shared by some teachers who didn’t like the idea of making reading a punishment.

Young people were also divided. One 17-year-old said the sentence “reeks of pampering and no consequences,” and doubted that students—especially minority students—in areas of lesser economic privilege, would be offered such light sentences. A 16-year-old said she thought the punishment made sense and would teach the offenders not only what they did wrong but why it was wrong.

T.C. Boyle, author of The Tortilla Curtain, said he hoped an offending teenager reading his book “will be able to live inside the skin of someone unfamiliar to him … and that the experience will enrich his social perspective.”

And Khaled Hosseini said, “Books allow us to see ourselves in another. They transform us. I hope reading The Kite Runner was a small step along that transformation for this young man.”

Personally, I see mostly positive in this creative sentencing approach. While an author might feel a bit of a sting in seeing their book assigned as “punishment,” the possibility of changing lives through one’s words and stories outweighs the sting. Changing and challenging the way people think—including ourselves—is one of the reasons why we write. A young person—or older person for that matter—who sees only the punitive element of being required to read is not likely to be a candidate for further reading, so it’s doubtful that the court has squelched a growing passion.

A larger question—and one that there’s neither time nor space to explore here—is why aren’t kids learning about the meaning of swastikas, the history of oppression and intolerance, and the cultural differences that make us richer as a nation? I was alarmed last month to hear that two-thirds of American millennials have never heard of Auschwitz, and a large number are unaware that the Holocaust took place. Such ignorance is dangerous, dreadfully dangerous.

Perhaps more of us need to be “sentenced” to read books that will enlighten us and make us think.

Let’s start with the folks who live and work at 1600 Pennsylvania Avenue.

“The ignorance of one voter in a democracy impairs the security of all.” (John F. Kennedy)

[You may have noticed some changes to my website. It has new headers, a new look, and some new pages—huge thanks to my friend Christine for her help. One new feature that I hope you will like is on the home page where I share brief stories of kindness. If you recall a kindness, experience or witness one, I hope you will consider submitting it for inclusion. There’s a link to the submission form. Let’s spread the kindness!]

18 thoughts on “Books as Teachers, Books as Atonement, Books as Lifeline”