Years ago, theologian, speaker, and extraordinarily kind man, Dr. Dale Turner, handed out little green cards with two simple words printed on them: “Extend Yourself.”  I have no religious background or education, nor any inclination toward such, but every time I heard Dr. Turner, he touched me to the core.  He also made me laugh—a fine combination.  I’ve carried that little card in my wallet and had those two words clipped beside my desk for nearly three decades.  It seems to me that the phrase “Extend Yourself” captures the essence of kindness.  It also highlights the difference between niceness and kindness.

Nice is something we can be without extending ourselves.  Nice is tipping the hat, holding the door, smiling at the cashier.  Nice may even be dropping a dollar in someone’s hand if we do so without looking the person in the eye and saying a genuinely caring word.  Kind is asking how we can help, offering our hand, jumping in without being asked, and engaging in conversation that goes beyond the superficial.  All of these actions have an element of risk—we might be rebuffed, ignored, or disrespected.

Nice generally doesn’t inconvenience us.  I can share my bounty with you because I have plenty.  Kind is when we share knowing that we may not have as much as we would like, and that’s okay.  We often go out of our way to extend ourselves or to be kind.

Extending ourselves is an act of generosity, whether material or relational.

Recently there was a story on NPR describing how the impulse to generosity seems to be hardwired in our brains.  In a study of children, researchers found that they smiled significantly more when they were giving treats away than when they received the treats themselves. But what the researchers found to be especially interesting was that the children smiled significantly more when they gave away their own treats than if they gave away an identical treat provided by the experimenter for the purpose of giving away.

I saw another story two days ago, about Calvin Olsen, a second grader in Las Vegas.  He told his parents that he had been given so much for Christmas he didn’t want anything for himself for his birthday.  Instead, he wanted “to give all my birthday presents to kids that need them.”  He asked for $25 gift cards for older kids and presents for the little kids.  Sixty people came to Calvin’s birthday party.  He collected over $600 in cash and gift cards for kids and teens in foster care, $100 of which was from his own savings.

That impulse to generosity that Calvin Olsen and the kids in the NPR study have seems to be an instinctive knowledge of the rightness of “extending yourself.”  Let’s hope as they grow older we don’t “help” them unlearn it.  Instead, let’s learn from them. 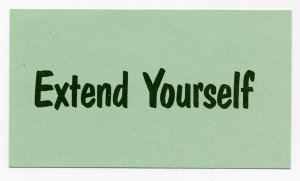 2 thoughts on “Extend Yourself”