“If you’re not outraged, you’re not paying attention.… Find what’s wrong; don’t ignore it; don’t look the other way. Make it a point to look at it and say to yourself: ‘What can I do to make a difference?’ That’s how you’re going to make my child’s death worthwhile. I’d rather have my child but, by golly, if I got to give her up, then we’re going to make it count.” (Susan Bro, mother of Heather Heyer, killed in Charlottesville on August 12, 2017)

On this one-year anniversary of the white supremacist “Unite the Right” rally in Charlottesville, VA, we need to pause and consider where we are, how we got here, and where we want to be—as individuals and as a country. And we need to commit—or recommit—to being activists in whatever ways we can—whether that means marching, running for office, writing letters, writing checks, or even just living our own values fiercely and consistently.

There are many exceptional groups standing up for justice, democracy, equality, and inclusion. We can’t support or align ourselves with all of them—there’s neither time nor money to champion them all. So each of us needs to choose what and where we will put our time and our dollars. For years, I supported the Southern Poverty Law Center from afar—reading their communications, occasionally sending a donation—content and confident that they were taking a lead on issues that I considered important.

For the past couple of years, I have supported them more actively and vocally. In addition to the exceptional work they do on the ground and in the courts, they have published some guides that deserve our attention:

I’ve already written about their very practical guide entitled “Speak Up: Responding to Everyday Bigotry.” It provides guidance for how to respond in a variety of situations, from an ethnic slur voiced by a neighbor, to a family member’s ingrained bigotry, discrimination by a business, bullying, or a teacher’s bias in the classroom. It even helps us to recognize and repair our own biases (yep, we all have ‘em). 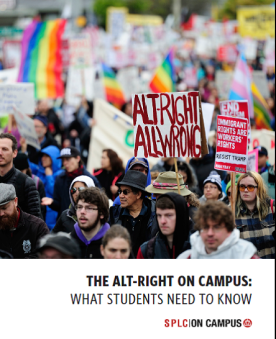 There are two other guides that are well-worth downloading and spreading the word about.

If you have or know teenagers going off to college, make sure to send them The Alt-Right On Campus: What Students Need To Know. They may never need it, but if extremist speakers show up or hate groups start forming, there are practical strategies students can take to counter the hate and stay safe while doing so. Having this guide on their computer as a reference might be as important as any textbook they buy.

For All of Us

The latest guide from SPLC is both a video and a handbook. The video, Ten Ways to Fight Hate, offers 10 principles and strategies to help people safely stand up to the hate and bigotry that we’re seeing across the nation. The video features a number of people, including former New Orleans Mayor Mitch Landrieu, Dr. Bernice King, Chelsea Clinton, and Susan Bro, whose daughter Heather Heyer was killed by a white supremacist at last year’s “Unite the Right” rally in Charlottesville.

The video is brief—under four minutes—and well-worth your time. SPLC also prepared a Community Resource Guide to accompany it. The Guide expands on the strategies introduced in the video, including tactics for supporting victims of hate or bigotry, creating an alternative, pressuring leaders, staying engaged, teaching acceptance, and much more. Download it as a reference for future and share it with your friends, family, and community.

We’re less than three months away from what promises to be a contentious and divisive election. Some people are going to behave badly. Let’s make sure we’re not among them and also that we have strategies for responding constructively—without succumbing to the same damaging behaviors.

SPLC offers some great resources to help us be good humans. Something tells me we’re going to need them.

10 thoughts on “Countering Hate: SPLC Offers Guides for College Students and the Rest of Us”