“The greatness of a nation and its moral progress can be judged by the way its animals are treated.” (Mahatma Gandhi) 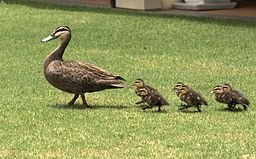 Sometimes it seems that it is easier to be kind to animals than to others of our own species.  There was a story in our local paper last week about traffic being stopped in both directions on a busy street as a mother duck and her brood of ducklings leisurely crossed four lanes to safety.  Drivers got out of their cars to direct traffic and protect the avian parade as commuters watched with patience and even delight.  No one honked their horns, no one yelled … I’m guessing all drove away from the scene with smiles on their faces, perhaps whistling Ernie’s “Rubber Duckie” song from Sesame Street.

Would the drivers have been as patient if the traffic jam had been of human making?  Hardly.  There would have been honking, hollering, and certainly gritted teeth by the time traffic started moving again.

Yes, it’s true that humans are not “dumb” animals and are accountable for their actions.  Ducks are, well, they’re ducks.  And they’re cute.

A traffic jam of human making might be the result of stupidity, carelessness, or the sheer fact of too many humans—and their machines—in one place.  That’s just asking for trouble.  Patience wears thin, judgments become harsh.  We slip into unkindness.

Ducks are a different story entirely, as are puppies, kittens, and most animals, especially the baby variety.  Cute often trumps impatience, judginess, and even irritation.

Plus, it’s less threatening to be kind to animals.  They don’t reject our efforts—or if they do we can clearly see that it is out of fear or injury.  Sometimes, when we try to extend kindness to people, they react with anger or insult.  They reject us.

In the case of our animal companions, the unconditional love they offer is rarely matched by our human companions, and it is certainly less perplexing.

I can remember a friend once telling me that she judged whether a man was worth dating a second time by how he treated her dog.  She said that measure never steered her wrong.

Still, even if we are not unkind to animals, we can probably be kinder to them.  One way is by joining millions of Americans who are signing on to the “Kindness 100” campaign of the American Humane Association.

It’s an extension of the long-celebrated “Be Kind to Animals Week,” which turned 100 this month, and has for generations taught us the importance of respecting and caring for the animals that share our planet (and tread it more gently than we do).

I tend to be skeptical of commemorative events: National Dill Pickle Week, Take Your Ferret to Work Day, and so forth.  There are so many of them, and many are quite ridiculous.

For example, tomorrow, May 14, is Chicken Dance Day – On further investigation, I learned that the Chicken Dance—wherein one dances like a chicken—is a tradition at weddings, children’s parties and family events (not my family, I’m vastly relieved to report).

And, lest you missed it, last Saturday, May 9, was Lost Sock Memorial Day (I swear I am not making this up).  I can only imagine that one drapes bunting over the clothes dryer and plays taps in remembrance of the argyles, sweat socks, and bobby socks that have been victim to mysterious demise.

I am willing to bet a lot, however, that neither of these commemorative events will stand the test of time and still be celebrated 100 years from now.  Unlike “Be Kind to Animals Week,” which has not only been celebrated every year since World War I, but has also had some notable celebrity spokespersons, including several U.S. Presidents, John Wayne, Shirley Temple, and Eleanor Roosevelt. None of whom, I can say with confidence, would have lent their name to Lost Sock Memorial Day.  Where is Carrot Top when you need him?

Because this year is the centennial celebration of “Be Kind to Animals Week,” the American Humane Association is extending the 2015 campaign beyond just one week in May to last a full year.  They’ve launched a campaign called “Kindness 100” commemorating 100 years and asking all Americans to become animal advocates by adopting four practices:

Buying Humanely Raised Products – that means seeking out eggs, meat, and dairy products that are humanely raised, such as American Humane CertifiedTM products, helping to ensure the welfare of 10 billion farm animals.  They’re not asking us all to become vegetarians or vegans, but simply to shop mindfully. Personally, this is a relief because I am a carnivore and am likely to remain one.  As much as I often wish I weren’t, I like my husband’s Chicken Marsala, and sometimes I crave a good hamburger, and I pretty much consider bacon its own food group.

Protecting Wild Animals – learn about conservation efforts, and teach kids about wild animals and the need to protect them by visiting parks, accredited zoos, and aquariums.  I usually get depressed when I go to zoos, or when I see whales and dolphins in captivity.  And I get both sad and angry when I hear the horrific stories of killing elephants for their tusks.  These are not simple issues—they are socio-economic and cultural, and hugely complex.  Education is one good place to start.

Protecting Animal Actors – look for films featuring the American Humane Association’s “No Animals Were HarmedTM” end credit, ensuring the safety of hundreds of thousands of animal stars each year…and avoid those movies that don’t.  While director Clint Eastwood and I would not be in agreement on many things, as far back as 1982 he said, “I won’t allow a scene where animals are mistreated. I won’t tolerate it and never have. There’s no movie that’s worth it.”  Good for Clint (talking to empty chairs notwithstanding).

Adopting from Animal Shelters – if seeking a pet, adopt or rescue one from an animal shelter, thus saving the life of one of the 6-8 million animals who end up abandoned each year.  And they are so cute … you’ll probably want two.

Kindness 100 and “Be Kind to Animals Week” are good reminders to us to care for the creatures that enrich our lives so greatly and ask so little of us in return. Take a moment to hug your dog or your cat, or to appreciate the birds in your trees or the squirrels in your yard.  How empty our world would be without them…

P.S. – May 16 is Do Dah Day—a commemorative event in Birmingham, Alabama.  It sounds like a cross between the Rose Bowl Parade and Mardi Gras (on a much smaller scale).  Since 1992, the event has raised more than $1.3 million to benefit homeless animals.  Kudos to the good folks of Birmingham.  Happy Do Dah Day!

“Animals don’t lie. Animals don’t criticize. If animals have moody days, they handle them better than humans do.” (Betty White)