“Do your little bit of good where you are; it’s those little bits of good put together that overwhelm the world.” (Desmond Tutu) 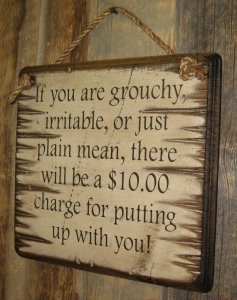 I’ve been reading about how Uber and other companies are changing the dynamic of customer relations.  That old “the-customer-is-always-right” mentality is being stuffed in the trunk with our luggage, and in a nifty bit of table-turning, businesses are rating their customers and rejecting those who don’t measure up.

One would hope that the ultimate outcome will be both companies and customers who strive for pleasant and kind interactions.

In the case of Uber, while passengers have always rated their drivers, now drivers are also rating passengers, and low marks may mean the customer is left waiting at the curb for future transport.  From an Uber blog post:

“An Uber trip should be a good experience for drivers too – drivers shouldn’t have to deal with aggressive, violent, or disrespectful riders. If a rider exhibits disrespectful, threatening, or unsafe behavior, they, too, may no longer be able to use the service.  Have partner drivers been deactivated for consistently poor ratings? You bet. Have riders been given a temporary cooling off period or barred from using the app for inappropriate or unsafe behavior? Yes. The system works to make sure the most respectful riders and drivers are using Uber.”

Lyft, a private-driver taxi company similar to Uber, has followed suit in rating passengers and using those ratings to help determine whether or not to accept ride requests.  Home rental service Airbnb also makes ratings of guests available to help home-owners decide whom they will and will not rent their homes to.

It makes sense.  If I have a choice in who I drive to the airport or who I rent my house to for a week, I’d like it to be the courteous passenger or guest—not the ones who are rude, ill-behaved, or unpleasant.  Admittedly, courtesy can be subjective: one driver might give high marks to the passenger who sits quietly in the back seat, while another might feel that person was cold and unfriendly.  One driver might like conversation and banter, while others prefer silence.  The same holds true with passenger preferences.  Maybe it all comes down to simple common sense: when we meet a person, we gauge their communication style and their personality and we adapt to them.  Ideally, they do the same to us and we meet in the middle, recognizing that we’re each doing the best we can.

The implications are fascinating.  In the case of Uber and Airbnb, customers are learning to be polite and considerate.  They’re learning that people in service industries expect and deserve to be treated with respect.  And they’re learning about the consequences of behaving otherwise.

When the customer rates the service and the service rates the customer, the hope would be that the rating is approached with a spirit of positivity.  All are looking for what’s good rather than for what isn’t.  Those who are optimists and seekers of virtue will find what they are looking for.  The danger is that people who are naturally critical or negative will revel in their new role as faultfinders.  Perhaps the answer is a complex algorithm that calculates each individual in his or her role as both the reviewer and the reviewee.

While there is always the chance of abuse if a subjective system is utilized by subjective and/or flawed individuals, if the company culture is positive, I suspect the system will settle into one that is also predominantly positive.

If one starts out with poor intentions, though, a two-way evaluation system is rife for abuse.  Look at what happened recently with Comcast—a company notorious for both abysmal customer service and a poor company culture.  In February of this year several stories of customer abuse were revealed.  When a customer tried to cancel service, her closing bill arrived addressed to A%#hole Brown.  Another customer who called Comcast to resolve channel access issues found her first name had been changed to “Super Bitch” on her next bill.  It would seem that these are not isolated incidents.  On another customer’s bill, the word “whore” was added before her first name and another customer was given the appellation “dummy.” Stories like this go all the way back to 2005, which would lead one to believe that Comcast has a serious culture problem and is doing little to fix it.  That obvious assumption is supported by the fact that Comcast consistently has the worst customer satisfaction ratings of any ISP in the country and is was named the “Worst Company in America” by a 2014 consumer survey.

The Beginnings of a Consideration Movement

Leaving aside companies like Comcast which show scant hope of ever exhibiting kindness or quality, perhaps there is a burgeoning consideration movement whose time has come: service companies rating their customers … dentists rating their patients … movie theaters rating their patrons….and all with the intent of creating a more pleasant and rewarding two-way relationship.  What do you think?

In our small company, we have exercised our prerogative to dismiss clients a few times over the years—nearly always for behaving disrespectfully toward our employees.  In every case, the decision resulted in improved office morale and created a space for a better, kinder client to fill.  Invariably, our only regret was that we didn’t do it sooner.

While it would be preferable if courtesy and kindness came naturally as a first response, perhaps the threat of a public rating system is what’s needed to arouse our kindness awareness, and that will ultimately lead to habitual kindness responses.

One can always hope….

“Unkind people imagine themselves to be inflicting pain on someone equally unkind.” (Marcel Proust)